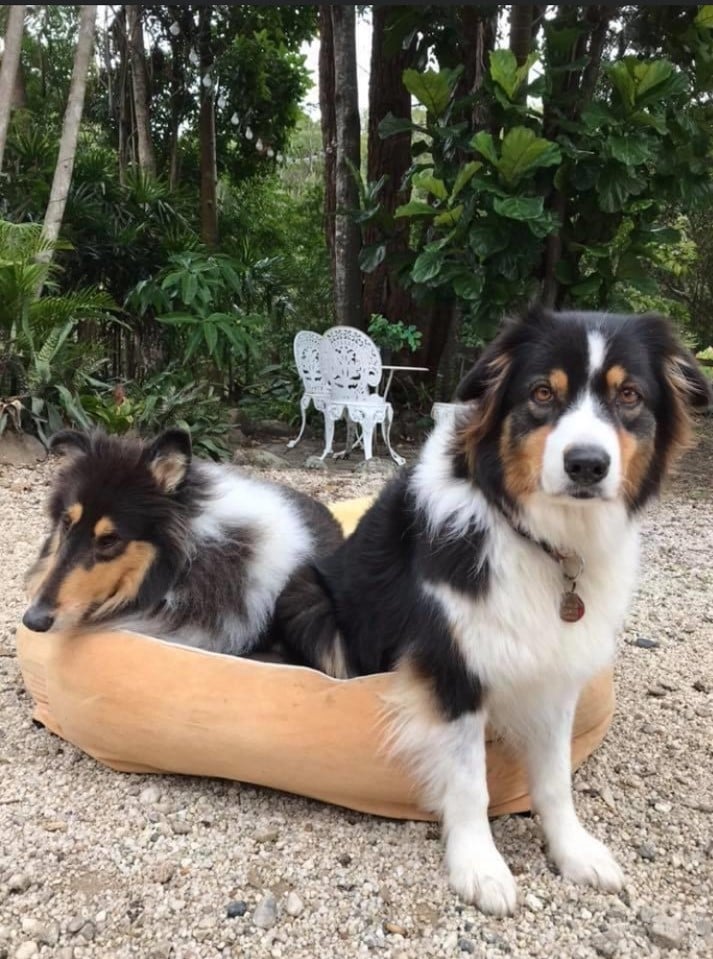 “The daily adventures on a farm can become mighty boring when everyone around you is vacationing,” thought Dot.

Seeing the humans lounging about gave her ideas of soft couches, pillows and cosy quilts!  She was tired of the gravel driveway game and stepping on the fig tree sticks that were forever falling! And then there was the red Myocum mud that she had had quite enough of, and so had her little white socks!

Restless, she nosied up to Dash and with a bit of a yowl and a pout asked him what he was going to do to make her life at the farm a “resort”!

“What do you mean ‘resort?’” puffed Dash, who already lived his life mostly horizontal and made his career out of floor collapsing! “We already live it large here at Tooraloo, Dotty, a dog couldn’t get better digs than this! It’s De-Luxe!”

“It’s all very well for you big guy,” Dot moaned, “the humans let you lay all about. and you’re so fluffy, heavy, and stubborn they can’t even drag you out off the carpet by your paws! You‘ve got them wired! As for me, I’m supposed to play and run and well? I’m tired Dash! I want a holiday too!”

Dash sunk lower into the carpet with a huge “harrumph.” He hated it when Dot started down the path of nagging no-return, so he foxed her into believing he had quickly fallen asleep.

Seeing Dash’s indifference, Dot had had quite enough! She decided to take “Resort Luxury” into her own paws and pounced up and onto the modular living room couch!

“Now THIS is resort style!” she thought. “Every doggie queen needs a throne.” So she proceeded to catch some zzzzz’s while wrapped up in a furry ball.

Just then her human master came in and saw Dot. She realised that Dot needed a soft spot to lay, and that she had earned as much for all her faithfulness. Besides, Dot was the favourite! She went to La Doggie Vita online, and found the fluffiest velour doggie bed she could, and in perfect pup pink!

A few days later, it arrived. Her human placed it at the foot of her bed, and Dot pounced in. Dash decided Dot was so spoilt, but as she was so cute, he didn’t say a word.

“Every dog has her day,” he thought, and so he laid down on the floor at her feet, the place he loved the most.

It’s always a beautiful day at our fig tree cath

Oh Joy! Celebrate those special moments with us @w

Come into our light… #farmstay #byronbayfarmstay

A birds eye view of our piece of paradise. Come ta

Enjoy FREE use of the spectacular common areas with mother nature!

The 5x9 meter in-ground pool, vintage cabana with outdoor shower (hot / cold), charming fire pit, rustic BBQ hut and views of the rural acreage are common areas. FREE and are included with your booking for shared use by all our guests. Become friends with our farm animals and wander the pastures in serenity.

To have EXCLUSIVE use of these outdoor amenities you must book an entire property and pay an additional fee.

Exclusive use is made with prior arrangement with management when booking. Please enquire with Concetta.

Cleaning and damage deposit fees will be included with your booking.

Tooraloo farm is perfectly located with easy access from M-1, and only 6 km from Byron Bay CBD, beaches, Bangalow, Brunswick, Mullum and close to the Queensland border. Only 2 hours from Brisbane international airport, 45 minutes from the Gold Coast airport, and a short 20 minutes from Ballina / Byron domestic airport, where you can hop a plane to Sydney in a hour!