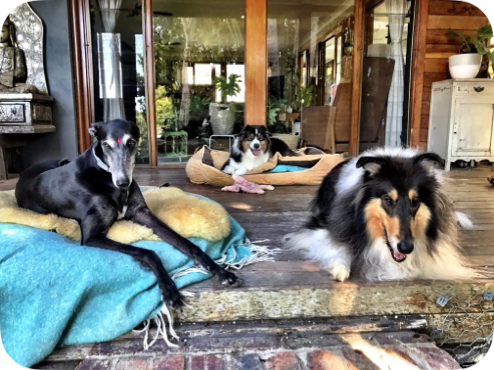 In the realm of love, there are many players…

Dash (aka the doggie version of the famed “Dash Rip Rock” of rock and roll fame), loves his flowing locks and super good looks which are known to attract a female pup, or two!  Though he’s Dottie’s devotee, parading about is a favourite past-time! He just can’t help it. A big-hearted flirt, he’s always keen to add a little foreign flavour to his vanilla farm life, and his fashionable flamboyance can often get him into husbandry hot water.

And so it came to pass, a gorgeous greyhound, the lovely lanky Lolita, sashayed into Tooraloo Farm Stay. She turned his head… and for a while, his heart!

Dot (cute, kind and, well – “round”) was no immediate match for the stature of the lithe Lolita! When she first heard there was to be a visitor of the femme fatale variety, her insecurities soared!

“The dire diet starts today!” she moaned to herself.

When Dash asked why she hadn’t devoured her breakfast with her usual fervour (Dot usually finishes her’s in double-time, and then has an eye for his!) she simply smiled and said, “just a bit full today dearest,” but her belly rumbled, and her emotional sinking feeling took her smile way down.

Dash found himself escorting Lolita all over the farm pastures, showing her this and that, telling her tall tales of his bravado and showing off his bark, which echoed across Myocum Valley. Lolita was entranced. His confidence had her swooning, and poor Dot found herself in the position of  “three’s a crowd.” So she stopped trying, and found herself a quiet place to mope; under the fig trees…and away from the romantic couple.

But Lolita, although charming, started to prove herself to be extremely high maintenance! Constantly needing Dash’s attention, and being extremely picky about her lodgings and meals. She began to complain to Dash, who was not at all the pandering type and soon tired of her whining.

“Farm life is chill time, earthy and peaceful. The natural beauty here is really what it’s all about. Can’t you be happy with that? And…well, with me?”

Lolita just scoffed. “I’m a city girl Dash, and I love my treats and luxury, and I love to be attended to. You may be handsome, but well, it just won’t be enough. I am going to leave soon, for the Sydney high life.”

Dash hit bottom. He realised he had been insensitive and unfaithful to his loving Dot, who never wanted for anything except to be with him. Even more than that, he found that he missed her honest and kind company terribly. She may not be as glamorous as Lolita, but Dash was realising that true beauty goes far beyond the superficial surface. His Dottie was truly beautiful inside and out. But how could he make it up to her?

In a flash of genius (Dash was known to perform best in flashes!), he knew just what to do!

Dinner time came around and he met Dot at the porch where their bowls waited. He watched Dot eat hers in silence and just as she finished, he nudged his bowl, still full, over to her.

“What’s wrong, are you not eating today?” Said Dot sadly.

“No”, said Dash, “I have saved it all for you. A full bowl for my baby girl, and a full heart of apology to go with it for neglecting you, Dottie. I want you to know I love you just the way you are.”

Dot’s heart leapt, for she loved Dash so much, and she couldn’t stay mad with him, ever. Hearts healed, together they nibbled at his gift of kibble as the sun set over beautiful Byron Bay!

Going on holiday and can’t bear to part with your own Dot & Dash? Take a look at our pet-friendly accommodation.

Step into another world…Book our latest creation

Your Morning, Our Views. Come see the magic and m

Enjoy exclusive use of the entertainment areas!

The pool, vintage cabana, fire pit, rustic BBQ hut and rural acreage are designated as event areas at Tooraloo Farm Stay. To have use of these areas you must book the entire venue.

To have exclusive use of the amenities areas you must either: